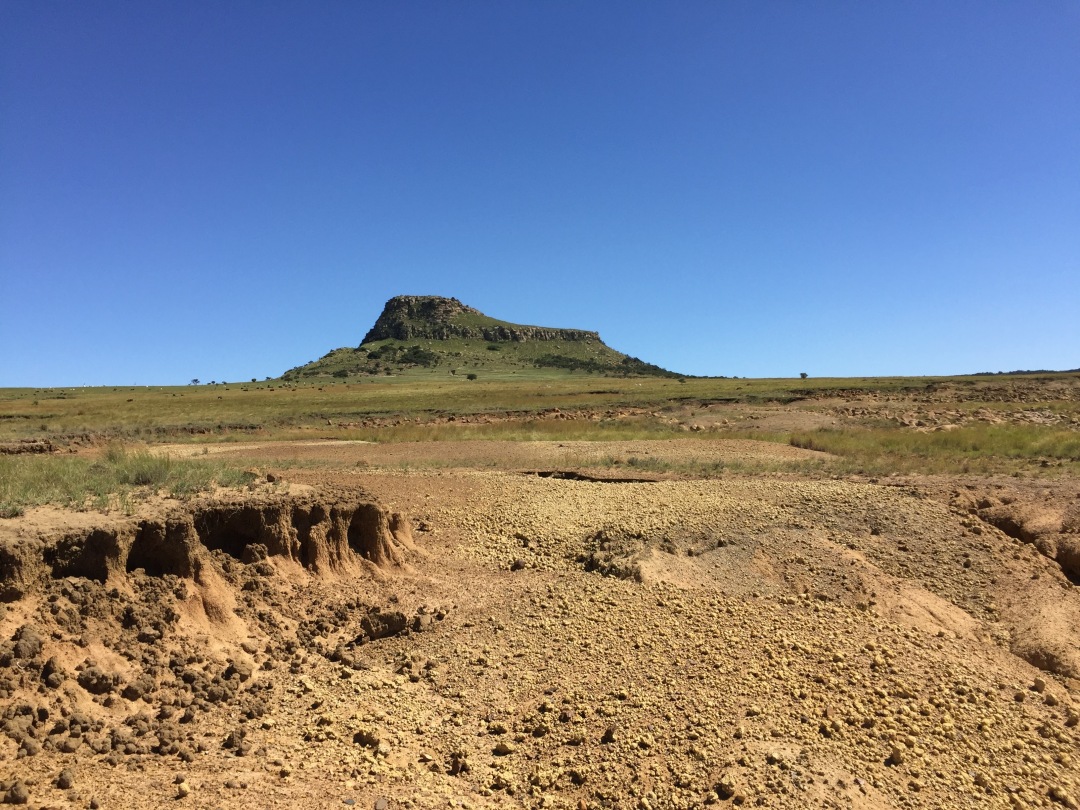 Podcast Episode 2: The battle of Isandlwana

Hurrah, you’ve made it to my website. Perhaps I may surmise that you have come via my new Redcoat History podcast? If so I wish you a hearty welcome. Here – take my canteen, slip off those old leather boots and warm your hands by the fire.

Actually, scrap that – a runner has just come in with news of a Zulu Impi approaching. Put your boots back, give me back that canteen. Is your rifle loaded? Good – get back in the firing line while I pack my cart and make for Helpmakaar.

Oh, you are still here? OK, well, in that case, I want to share with you some video clips and images that will help you to better visualise my latest podcast episode about the battle of Isandlwana – that much-discussed massacre of over a thousand Victorian-era British and Empire troops in January 1879.

If you haven’t yet listened to the episode then you can do so here, via apple podcasts here or on Spotify. Or of course you can press play on the embedded player below:

Oh, by the way, do stick around until the end of this post for my bibliography/recommended reading list.

And if you can’t get enough of my voice and smug-mug then below you will find the rather badly made film I put together when I visited a few years ago.

OK, OK so I also promised maps…Well, how about this fancy one of the camp layout that I tried to make myself? 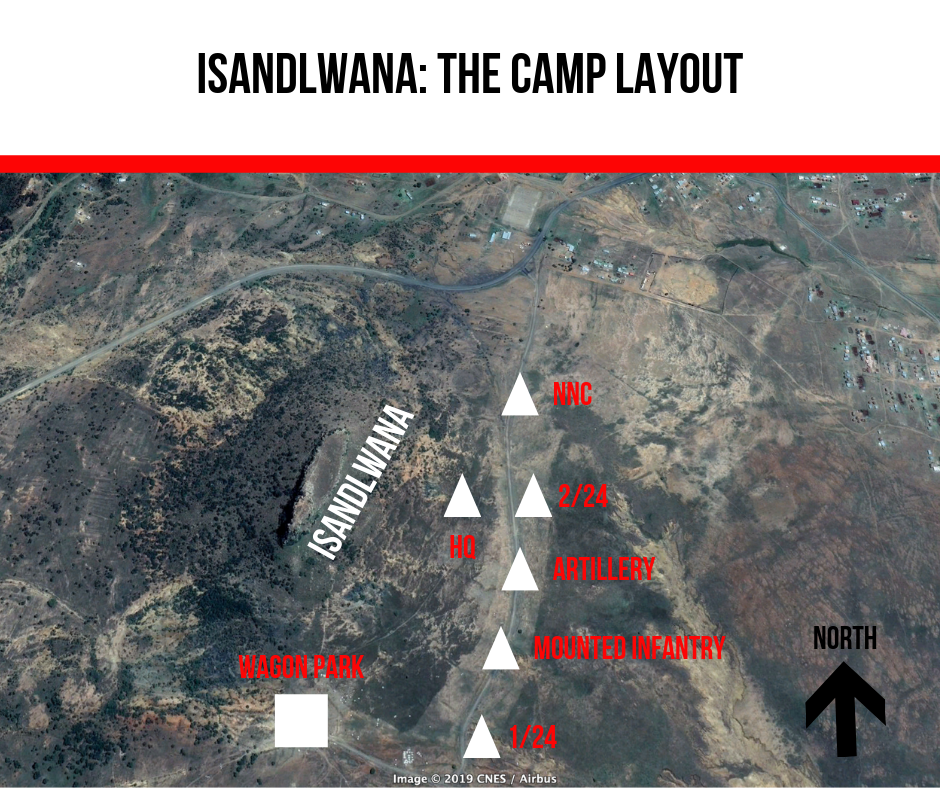 So that should give you a basic idea of the geography of the area and the location of the different units in the camp – the 1/24th at the south with the Natal Native Contingent on the far north of the line.

The map below gives a good overview of the movements of all the major players in the run-up to and during the battle of Isandlwana. I unceremoniously expropriated without compensation this image from a post on the website of the excellent South African Military History Society. 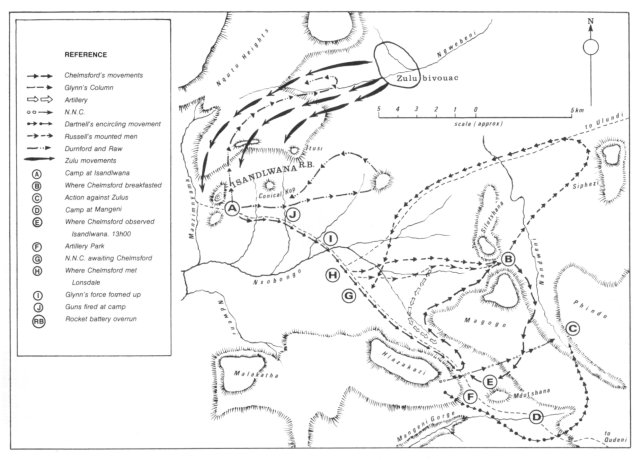 So as the battle commenced I want to give you a taste of the action from the film Zulu Dawn. While not perfectly accurate it does seem pretty good to me:

Actually, as we’ve come all this way together it would be rude not to watch the end of the battle:

So as the battle approached it’s climax what were the dispositions of the British troops? Well, I’m glad you asked as I’ve made this handy map:

Here is the key:

4 – Elements of the Native Horse

Minutes later the line began to collapse as the Zulus used the gap between Pope and Durnford to began infiltrating into the camp.

Trying to withdraw across broken ground and into the camp, even for well-trained, disciplined troops was a big ask as the Zulus swarmed around them.  I think the painting below gives a great sense of the chaos that engulfed the battlefield. It was painted by Charles Fripp. 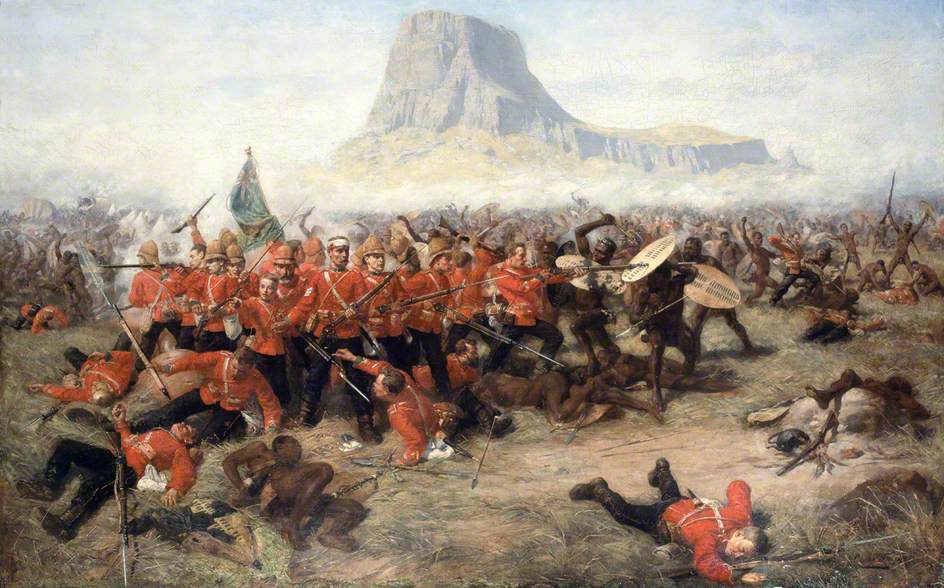 According to the National Army Museum, Fripp travelled to Zululand in March 1879 as the ‘special artist’ for The Graphic, a weekly illustrated newspaper. When he visited the battlefield four weeks after the defeat, bodies still lay unburied and rotting on the ground.

The painting was recently restored by the National Army Museum and there is a short film about the work, which you can watch below:

So as the battle began to end a number of men were able to make a dash for safety, trying to evade both the left and right horns as they met behind the mountain.

It’s a long, steep climb and a dangerous dash across the Buffalo river. I walked the trail a couple of years ago and made this film of the journey that will hopefully give you a good sense of the geography:

So if you are a fellow military history geek you probably want to know what books I used for the majority of my research for this episode.

Well, there were literally dozens, but I’ll just add a small list below of those that I leaned on the most and would recommend that you buy…Talking of which if you purchase from these Amazon links then they’ll throw me some change and it will not cost you any extra – a win, win!

The other book I highly recommend is Zulu Rising by Ian Knight, it’s fantastically detailed about the battle from both the British and the Zulu perspectives

I’d also like to give a heartfelt mention in despatches to Keith Smith and his book Dead was Everything.

And also to my favourite contemporary account of the battle by the indefatigable Commandant Hamilton-Browne of the NNC who left us the wonderful work A Lost Legionary in South Africa, which can be purchased below or, as it is out of copyright, downloaded from archive .org.

I’ll also be adding a mailing list soon – but I want to write all of my notes up into a short book so that I can give it to you for free when you sign up. Watch this space!

Anyway please stick with the podcast because in Episode Three we will be crouching behind the mealie bags as the Zulu reserve sweep across the Buffalo River and attack our supply base at the Rorke’s Drift mission station…It’s stirring stuff. I’ll see you there.

View all posts by imagejunkies

4 thoughts on “Podcast Episode 2: The battle of Isandlwana”

Redcoat History is a podcast and website devoted to the study of British military history from the Napoleonic wars to WW1. Learn the history of the British army, its most famous campaigns, its worst defeats and its greatest leaders.

This is a website and podcast for the military geeks, the obsessives, those who like to feel what it is like to fix bayonets and charge the French. It is military history as it should be: exciting, fast paced and so real you can smell the gunpowder.