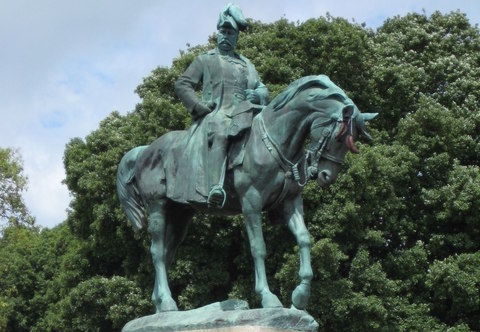 As an amateur historian what I want to talk about today is the currently controversial subject of statues and memorials – especially that of Sir Redvers Buller V.C in Exeter.

I am politically homeless. I’m not red, nor am I blue. This article isn’t about politics. You may disagree with me and that is fine – hopefully friendly disagreement is still possible even in our current polarised world.

If you have been following the Black Lives Matter protests across the US and now the UK you’ll have seen that some of them have turned violent. It seems to have also spawned a wave of attacks against statues and memorials that some of the protestors believe to be racist.

Well, let’s take a look at some of the incidents. The cenotaph was attacked by what appears to be (from the video here, ) a small number of people who wanted to burn the Union flag. Then there has been graffiti scrawled on Churchill’s statue in Parliament square. In Glasgow it seems putting a cone on the head of the Duke of Wellington is a regular occurrence and now there is talk of removing the statue entirely. The Queen Victoria statue in Hyde Park has been defaced. There are many other examples – campaigners regularly come for Cecil Rhodes and there are even calls for Gandhi to be removed in Leicester. Also, on the list of statues that protestors want removed are Oliver Cromwell, Robert Clive, Sir Thomas Picton and Redvers Buller.

Many of these people are controversial but as a student of the history of the Anglo-Zulu War, my first question when I saw this list is, why Redvers Buller?

There is a large statue of him mounted on his horse in Exeter. It has been defaced a number of times already. In one tragic incident an 18-year-old died when he fell from it while apparently trying to place a traffic cone on Buller’s head.

Now, Buller is only one example from the list but I thought it would be beneficial to take a deep dive into his life history and see if my preconceptions about him being a decent guy were wrong.

Here is a very brief outline of his life:

I am a member of a Facebook group filled with experts on the Anglo-Zulu War (both British and Zulu). I asked if there were any anecdotes or sources regarding any negative behavior by Buller during the campaign (and by negative behavior I mean did he slaughter or mistreat black people?) – so far nothing has come up.  While I can’t recall any sources in which he uses the awful racial slur of “Kaffir” it was likely that he could have done so.

So, if his performance in the Anglo-Zulu War is not the reason for some people demanding that his statue in Exeter is removed, then what is? Well, again I had to turn to our old friend Dr. Google. In the local Devon Newspaper’s article on the statue it says:

“Buller is a controversial figure with rumours persisting that he had a hand in the introduction of concentration camps seen during the Boer War and he has been accused of war crimes.” Could that be true? Was he the mastermind behind the British Boer War strategy of rounding up South Africans (both Boer and black) and placing them into Concentration camps?

Just to backtrack for a moment the Anglo-Boer War of 1899-1902 was a conflict fought between the British and the (white) Afrikaaner states of Transvaal and the Orange Free State in South Africa. It was a bloody conflict that dragged on much longer than expected. Even once the Boers had finally, and at great cost in blood and treasure, been beaten in the big battles many of their soldiers continued to fight a guerilla war against the British. The fighting turned nasty.

Buller had been the British commander of the Natal Field Force – sent to relieve the besieged British garrison at Ladysmith. His command was a disaster – he was defeated time and again by the Boers and his troops suffered very heavy casualties. In 1900 he was superseded and returned to the UK before the end of the year, his part in the war was over.

Lord Roberts and then Herbert Kitchener took over the reins of command. It was under their watch that a scorched earth policy was implements and the Concentration camps were formed. South African Boers still shudder at the way they were treated by the British during this period. What began as refugee camps quickly became internment camps that saw thousands of civilians die due to disease and hunger brought on by terrible British mismanagement.

And it wasn’t just white Boers who suffered. Black people were also settled in these temporary camps. In Peter Warwick’s book Black People and the South African War he says that an estimated 14,000 black refugees lost their lives in the camps (but as human rights campaigners of the time paid little attention to the black population the number may be higher). Horrific times and a dark moment in British history – but to get back to the point of our story I still do not see Buller’s mark on any of this.

As John L Scott says in his MA thesis on the subject:

“It was not until February 1901, that an official report was made to the British government about the establishment of camps for the Boers. There are no statements on the beginning of the camps in the numerous parliamentary papers prior to the February report. The Secretary of State for War, James Brodrick, stated in Parliament in 1902 that the first camps for women and children were formed in January 1901, after Roberts departure. This was not correct, as there is substantial evidence of a camp for women being formed at Mafeking as early as July 1900, and others at Bloemfontein and Pretoria in September of that same year. Other camps at Potchefstroom and Port Elizabeth were established along with the beginnings of black camps by the end of the year. Histories which state Kitchener established the camps are in error, as Roberts began the camps before his departure in late November 1900.”

You’ll notice that Buller’s name is not even mentioned here.

Ok, so after taking this dive into the life of Redvers Buller the only obvious crime that I can see he was guilty of was being a colonial-era soldier who loved his country and fought whoever the government told him to – as soldiers always have and always will. Did he kill people? Yes, probably many – and he was good at it, after all his job was to close with and kill the enemy. We can argue that the wars he fought were unjust, but was that his fault? How many wars do stand the test of time as “just”? Should we not honour our soldiers killed in Iraq and Afghanistan? Are wars the fault of those who fight them?

And so let us move on to the broader question – statues, especially those of military men (as that is my specific area of interest and I feel that statues of slavers is a seperate and more complicated issue). I think we can agree that Buller was no slaver and as history goes seems to have been a fairly decent fellow. Should his statue and others like him be removed as some groups are demanding?

It’s such a deep question – impossible to answer in a tweet as most people like to do in this day and age. Are some of these military symbols of the past destructive and do they undermine Britain (and other countries) attempts to successfully integrate people of different ethnicities? Possibly, but I’m afraid that history is messy, people are messy, emotions are messy. Does hiding the past expunge it? I believe not. As a father of mixed children in South Africa I have already been asked difficult questions such as “Daddy, why are there no white people in Soweto?” – I actually welcome these questions, they are important. Isn’t it a parent’s job to learn about the issues and discuss them? For me, many of these statues are a starting point for a home history lesson. Perhaps we should all consider doing what I have done in this article and learning about a few of the characters before commenting either in support or to attack them. But remember, to learn everything about a historical figure is a lifetime of study. They are complex figures, as we all are.

I’ll leave with a quote from American comedian Andrew Schulz:

“These people [the controversial statues] are in no way perfect. They are incredibly flawed. But their statues are not erected to celebrate their flaws, but rather to honour their contributions to society. Contributions we still admire to this day. . .It’s easy to judge people of the past by our current moral standard, but if the standard is too high no statue will ever exist. We are all hypocrites across the board – we want to take down statues of people for their fucked-up behavior and yet we continue to support Nike and Apple. We all know sweat-shops and slavery are wrong but we are still wearing Jordans. . . We like to condemn the evil system while simultaneously reaping the benefits. . .Your iPhone should cost $10,000 but it doesn’t because of exploitation. . .We judge the people of the past and the people of the future will judge us. . . We should recognize that these statues don’t embody every action these people have ever done but rather are symbolic of the positive contributions they made. We can offer the same empathy to the people of the past as we can only hope the people of the future will offer us.”

View all posts by imagejunkies

Redcoat History is a podcast and website devoted to the study of British military history from the Napoleonic wars to WW1. Learn the history of the British army, its most famous campaigns, its worst defeats and its greatest leaders.

This is a website and podcast for the military geeks, the obsessives, those who like to feel what it is like to fix bayonets and charge the French. It is military history as it should be: exciting, fast paced and so real you can smell the gunpowder.